Is the FASB going to delay ASC 842 for Private Companies?

A couple of the biggest trade organizations are asking them to.

The American Institute of Certified Public Accountants (AICPA) just sent a letter to the Financial Accounting Standards Board (FASB)—on May 13—asking the FASB to consider delaying the new lease accounting standard (ASC 842) one year for private companies. The letter was written only 10 days after a similar letter was sent from the Associated General Contractors of America (AGC)—representing 26,000 private companies. Both letters were written in response to the concerns and challenges private companies have voiced as they try to adopt the new standard, especially only one year after the new revenue recognition standard became effective.

Is there a possibility the delay will actually happen? In short, yes, but we don’t think it would meet a more-likely-than-not threshold (i.e., don’t accrue for it!). While the FASB has delayed adoption requirements in the past (e.g., in 2015 the FASB agreed to delay the revenue recognition standard until 2018), there are a few reasons we think ASC 842 will still become effective for private companies as scheduled:

However, there are a few key points raised in the letters where everyone should take note:

First, the new lease standard is pervasive and takes a LOT of work! The AGC highlighted “As all-encompassing as the Revenue Recognition standard is, the Leases standard will have an exponentially greater impact on many private companies…”

Public companies who have already implemented ASC 842 reported that adoption required more time and resources than anticipated. Private companies who have early adopted or began the process have reported the exact same thing. According to PWC’s 2018 Q4 Accounting Change Survey, “87% of respondents said that the combined difficulty of adopting recent accounting changes was somewhat or very difficult. A few comments included: ‘Tremendous time and expense’, ‘Incredibly taxing’, and ‘Limited internal resources’. 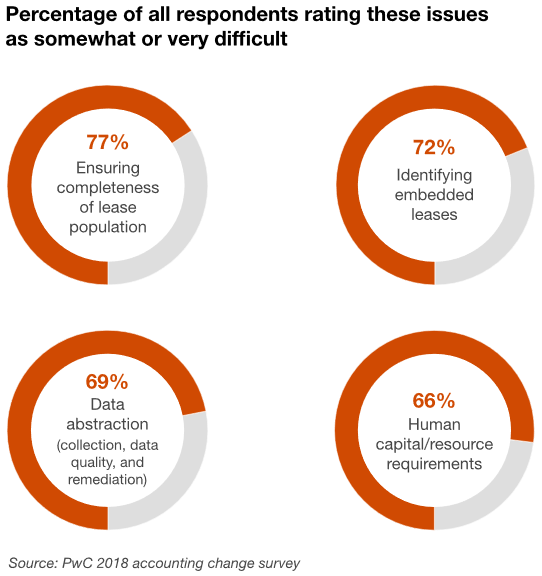 Also, debt covenants may need modification! The AICPA highlighted “Many private companies will have to review loan covenant calculations to ensure the new standard does not cause technical defaults and likely will have to work with lenders and users to modify debt and other financial covenants as needed in response to the effects of the new standard.”

If you have debt covenants and operating leases (including your office space rental), you’ll want to make sure you know your debt covenant calculations are impacted, and beginning conversations with your lenders early will help ensure no costly surprises when you adopt the leases standard.

Some software is not ready! Wait, what? Sure enough, The AICPA’s Technical Issues Committee has stated that “some of the third-party vendors that have developed solutions to assist companies in implementation of the lease standard have errors in their software and it will take some time to sort through to ensure these solutions are accurate and auditable.”

Rest assured, Netlease by Netgain is fully accurate and auditable. In fact, we’ll follow up this post with the top considerations you need to take into account in selecting software.

In summary, we will keep you updated on any FASB reactions or updates, but don’t let that delay you in preparing for adoption—sooner than later.

Read both letters written to the FASB at the links below.

Let us know if you have questions or if you would like to learn more about the new lease accounting standard.

How to allocate transactions in NetSuite to